There are 156 wallpapers included in the mega Warcraft wallpaper pack. This download is packed full of characters Azeroth and includes themes from every WoW expansion to date. Some characters and races included are The Lich King, Night Elves, Humans, Orcs, Pandaren, Gnomes, Tauren and much more! This download comes with the 156 individual images files as well as a themepack file for easy installation on Windows. World of Warcraft (WoW) is a massively multiplayer online role-playing game (MMORPG) created in 2004 by Blizzard Entertainment. It is the fourth released game set in the fantasy Warcraft universe, which was first introduced by Warcraft: Orcs & Humans in 1994. World of Warcraft takes place within the Warcraft world of Azeroth, approximately four years after the events at the conclusion of Blizzard's previous Warcraft release, Warcraft III: The Frozen Throne. Blizzard Entertainment announced World of Warcraft on September 2, 2001. The game was released on November 23, 2004, on the 10th anniversary of the Warcraft franchise.

Download and use it now: Warcraft HD Wallpaper Pack

Get 160 unique HD wallpapers from the Game of Thrones universe. There is a very wide range of wallpapers in this pack with all the main characters from Game of Thrones like Daenerys Targaryen, Arya Stark, Ned Stark, Stannis Baratheon...

At its core, 3-D Wallpaper PRO is designed to be an automatic desktop wallpaper changer. You can select the time interval, queue your favorite photos and it will automatically change the desktop wallpaper for you. But it also has a...

A simple application that can download and set wallpapers onto the desktop automatically, according to the settings configured by the user. Online Wallpaper is a useful program that was especially designed to handle desktop backgrounds with minimal interaction from the...

Wallpaper Slideshow Pro is a great utility for displaying your favorite images as your desktop background wallpaper. Wallpaper Slideshow offers you complete control of your wallpaper collection. It has lots of options that allows you customize the way wallpapers are... 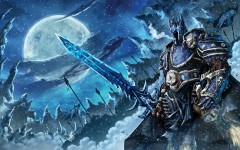